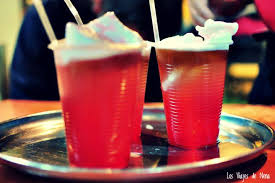 The ''Terremoto'' is a traditional Chilean cocktail or drink, created at the end of the 20th century, and can be recognized as a derivative of Roman punch. The name is due to the fact that it was invented after the 1985 Chile earthquake. Although its origin is not confirmed and many are awarded its creation, this drink has been widely popularized in Chilean popular culture by the bars La Piojera, Rincón de los scoundrels, and the hole.

The drink is mainly composed of white pipeño wine or unnamed white wine (generic wine of any strain), pineapple ice cream (pineapple) and grenadine. In its traditional presentation (a glass 400 ml approximately) it has the name of earthquake. The large jug is popularly known as Cataclysm, the repetition in a small vessel is known as Replica and the small vessel before (or if it is the only one) is known as tremor.

The well-known La Piojera bar in downtown Santiago was, according to its tenant, recognized for serving this drink since before 1985. This restaurant also serves the Replica, which consists of a portion similar to the previous glass, but you can also choose to take one of the well-known Tsunamis or Tidal waves that are prepared based on a mixture of beer, wine, pisco and ice.

The best known version of the origin of the name of this drink refers to the restaurant bar El Hoyo, located in the commune of Central Station. According to his tenant, German reporters arrived to cover the 1985 earthquake, quickly drank the drink and, feeling one of them somewhat dizzy when he stood up, exclaimed: "This is an earthquake!"